Alzheimer’s disease, a form of dementia, affects 5 million Americans according to the Alzheimer’s Association. In Virginia, 140,000 adults are living with the disease right now. The progressive, fatal disorder, which affects seniors ages 65 and older most commonly, is the sixth leading cause of death in the United States. Some medications have been approved to slow the progress of the disease, but researchers are still searching to learn more about the disease process and find a cure. Here’s a short two-minute overview of the damaging changes Alzheimer’s disease cause in the brain.

Is dementia an evitable consequence of getting older?

No. Old age does not cause dementia, but dementia often affects older adults. Dementia simply refers to a condition of mental decline that is so severe that it affects daily activities of living. It might be normal to misplace your keys at nearly any age. It’s not normal when someone consistently can’t remember the name of the keys, can’t retrace their steps to locate them, and is confused and upset by the whole process.

Are there different types of dementia?

While Alzheimer’s is the most common and well-known form of dementia, it is not the only type. Vascular dementia or vascular cognitive impairment is the next most common type and can occur after circulation is cut off to areas of the brain. This can be caused by a massive stroke or smaller events that make a bigger impact on functioning over time. Both Alzheimer’s and vascular dementias cause changes in how the brain works. Because different areas of the brain are damaged, it can cause a host of symptoms such as memory loss, difficulties thinking and paying attention, problems with judgment and making decisions, and mood changes.

Sometimes, some forms of dementia or cognitive decline can occur because of depression, medication side effects, alcohol abuse, thyroid imbalances, and vitamin deficiencies. It is wise to pursue a thorough diagnosis from your health professional. Your primary care doctor may refer you to a neurologist, neuropsychiatrist, or neuropsychologist for example.

Are treatments available to help someone with dementia or cognitive decline?

Yes. If you or a loved one is experiencing difficulties with memory, attention, communication, reasoning or judgment, and feeling depressed or not themselves, neurofeedback training can help improve their symptoms. Neurofeedback training relies on the neuroplasticity of the brain and its amazing ability to learn and rewire itself to compensate for areas that have been damaged by disease or injury. One study of Alzheimer’s patients who received neurofeedback training showed improvements in memory, recall, and recognition.

If you or a loved one is having difficulties with their memory, has symptoms of dementia, or is in the earlier stages of an Alzheimer’s diagnosis, neurofeedback training may help improve their functioning. Neurofeedback training is non-invasive and painless and involves re-training your brain to function more optimally. If you live in Manassas, Virginia, Dr. Ed Carlton, DC, BCN, a licensed chiropractor, and certified neurofeedback provider, offers free, in-person evaluations to patients who want to explore whether neurofeedback might make a difference in their lives or the lives of a loved one. Learn more about what makes the Carlton Center unique and what patients have to say about what neurofeedback has meant to them. 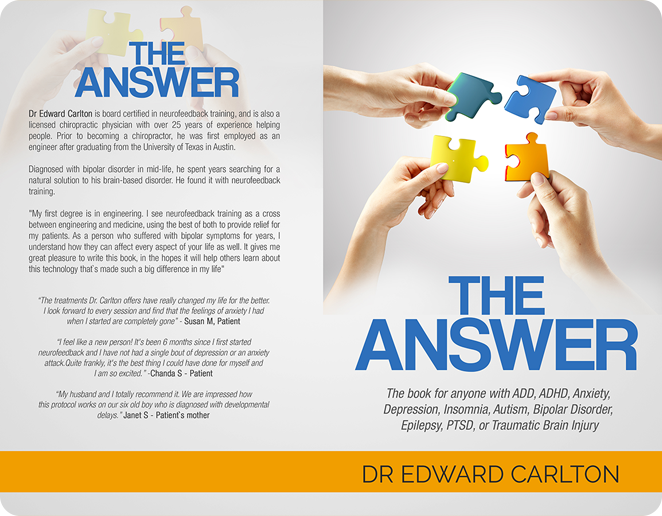